Get a complete overview of your marketing performance

The Ile de Beaute chain of stores is part of the Sephora company (owned by the LVMH group), and occupies a leading position in the global market for perfumes and cosmetic products.

Find out the real value of campaigns

Automatically import cost data to Google Analytics from all your advertising services. Compare campaign costs, CPC, and ROAS in a single report. 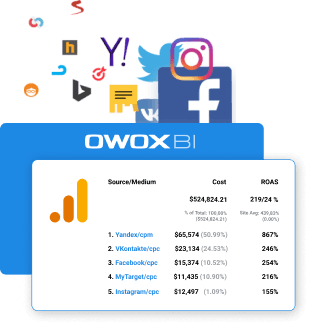 Customers can generally buy the goods offered by Ile de Beaute both online and offline. When buying a new perfume, a customer may first want to explore the aromas and only then make a purchase online or in a physical store.

The Ile de Beaute team wanted to deeply understand the behavior of their users in terms of their interaction between online and offline stores. They wanted to show in numbers that online marketing efforts are not limited to generating revenue from online orders but also affect offline sales (the so-called research online, purchase offline, or ROPO, effect).

We suggested building a system of omnichannel marketing analytics and reports.

‘‘
This case study is part of continuous work we’ve been doing with OWOX for almost two years. It has put us on the rails to integrate offline data in our online analytical environment and exploit that data to enhance our commercial performance. More than technical and analytical support, the OWOX team has become our key interlocutor to discuss our global problems, such as attribution in an omnichannel environment.
Юрий Захватов,
ведущий аналитик ,
Sephora

To solve problems with ROPO analysis, Ile de Beaute marketing experts and analysts had to take the following steps:

To implement this plan, the Ile de Beaute team turned to OWOX BI, since we’re experts in online analytics and data fusion and have been a partner of Ile de Beaute since 2016.

Step 2. Automate the flow of data

To automate the flow of data, Ile de Beaute analysts, following the recommendations of OWOX BI, did the following:

Using SQL queries, the Ile de Beaute team combined all data collected in BigQuery into a single table. Now they can use this data to build reports in a company-friendly format using the Data Studio data visualization tool.

It’s worth considering that data for building reports can be combined not only in visualization services like Data Studio, Tableau, and Google Charts. Using the instructions developed by the OWOX team, in a few clicks you can connect a table created in BigQuery directly to the BI Attribution and BI Smart Data tools to automatically generate ROPO reports in the OWOX BI office.

As a result of building a system for marketing omnichannel analytics, the Ile de Beaute team answered a number of questions important for business development.

For example, they had a hypothesis that perfume brings the most ROPO revenue. However, the report showed that in fact the facial care category in the anti-aging products series has a large ROPO share. These products can be considered when developing the next online advertising campaign.

All this data and the correct analysis of the ROPO effect helped the Ile de Beaute team to clearly define and present the effectiveness of online advertising, taking into account all actions of users both online and offline. Also, thanks to ROPO analysis and the ability to download offline transactions into a separate Google Analytics view, marketers at Ile de Beaute can better understand the behavior of different segments of their target audience, allowing them to plan marketing activities in more detail.

The next step is to increase the percentage of identified users in order to more accurately determine the behavior of each segment. Part of this task was solved by identifying users not only who are authorized at a given time in a particular session but who are not authorized but have a loyalty card that can be matched retroactively.

Discover how OWOX BI analytics can boost your business